Manifesting Greatness: The End of a Stamford Artist’s Long Journey

Today I’d like to do things a bit differently; I’d like to start broadening the Horizons of The Funk Yard, and do more than straight up album reviews. To start I’d like to talk about something really special. As some of you may remember, one of the first reviews that I did for this blog was for a mixtape by the local Connecticut Hip-Hop artist Jahan Nostra. Back in December my buddy Steve and I also made this mini-documentary on Jahan, who at the time was in the process of recording his new album ESP. Hard work pays off, and as a reward the two of us were invited to attend the album’s listening party on Saturday.

Everything transpired at a hole in the wall juice bar in South Norwalk, known as The Vapor Well. When Steve and I rolled up (admittedly a bit early,) there wasn’t much going on, but we took a seat, grabbed a drink, and waited for the masses to filter in.

Jahan was noticeably on edge, bouncing around talking to his team, making sure that everything would come together perfectly for his great unveiling. Soon people of all shapes and sizes began pouring in, and Nostra did his part to welcome and introduce them to each other. It was then that it struck me how easily the role of a unifier came to the Stamford artist: his energy was contagious, quickly cultivating the room into one seeping with laughter and dancing.

All the while DJ Lokash rocked the wheels of steel, filling the air with Jahan’s biggest influences; classic Hip-Hop artists like The Roots and A Tribe Called Quest energized the crowd, amplifying the anticipation for Jahan’s newest artistic endeavor.

Around 10 p.m. it was announced that the album listening was about to begin. Steve and I abandoned the comfort of our seats to join the rest of the party as they gathered around Nostra, eagerly waiting to hear the album that had been years in the making. After a heartfelt introduction about his creative process and inspiration, Jahan ushered in his “Stamford anthem” Welcome Home, once more unifying the crowd under the familiarity of those first few notes.

From there the music took a turn towards the unfamiliar. In the interest of length I won’t go into detail about all of the tracks, but I will say this: the album is a perfect reflection of Jahan Nostra’s essence as an artist. It is dynamic, never coming with the same vibe twice, but simultaneously never changing so much that it feels like Jahan is simply playing into a style. It feels organic, but detailed, fun, but also at times somber and thought provoking.

One of my favorite tracks is the concept driven song Bricks and Scholarships, which felt very much like it could be a Lupe Fiasco song, but with a Nostra twist (as a HUGE Lupe fan I really appreciate this). The track featured a menacing beat and a catchy, but hard hitting chorus that sought to illuminate the illusions of the drug game. Really grade A stuff, I cannot WAIT to hear how it sounds on my stereo at home. Another stand out for me was the song A Day In The Life, an easy going track (some would call it “Ryder Music) that would be perfect for just chilling out or driving around to. Jahan’s vocals fit the track like a firm glove, with a flow that really played to the music, matching it’s laid back energy.

Jahan ended the night with a track I actually had the pleasure of watching him create. When Steve and I filmed our mini-documentary we accompanied the artist to his studio and saw as his laid down the first verse of Her/She. Hearing the finished product, however, was a completely different experience. For one the added guest vocalist absolutely KILLED IT on the chorus, and the energetic, crisply mixed beat really helped Jahan’s voice to pop. The song is a radio banger for sure, and I couldn’t stop myself from busting a move in the middle of the crowded floor (accidentally almost killing a girl in the process…whoops).

Overall, I really, REALLY loved the album and I can’t wait to get my hands on it. I can’t lie, I was beginning to get a tad annoyed, as the album has been pushed back several times since we made our film. But after hearing the full thing I realized Jahan is a true artist and a perfectionist, and if he can continue to release projects of this caliber, then he should be given all the time in the world. The album should be dropping later this month, to known exactly when, follow Jahan Nostra on all of his socials, listed below. 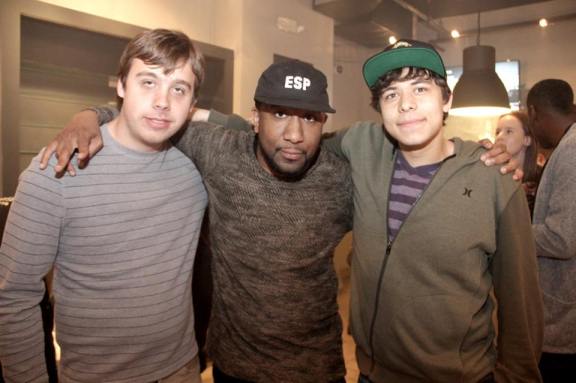